Last month marked 14 years since Gmail came into existence. Funny story – when Gmail was announced to the public on 1st April, 2004 not only did it arouse skepticism from those in the industry (owing to Google’s popular April Fools’ Day pranks), but it didn’t even have the infrastructure required to provide millions of users with reliable service.

However, Gmail quickly became a force to reckon with. Its popularity threw competitors Yahoo and Hotmail off their game! By 2016, Gmail had a 20% market share and by 2017, had 1.2 billion users (source). Ever since we added G Suite to our product portfolio, we at ResellerClub have also seen the success and popularity of the product among our customers.

I’ve come to understand why Google is always so brilliant – constant evolution. I mean, a few days ago, Google introduced us to the improved Google Assistant (Google Duplex) which WOWed me and many others. Google’s commitment to product upgrades to not just to keep up with the current trend but set benchmarks by never stagnating is what makes Google invincible. With Gmail, Google has been no different. Over the years, Gmail’s updates included adding 57 languages including Hebrew, Arabic and Cherokee, Gmail for domains, forgotten attachment detector, undo send (this one changed my life!) and priority inbox, to name a few. More recently in April of this year, Google announced a major redesign for Gmail. The new features & upgrades are now live on your Gmail. If you haven’t had the chance to explore the changes, here’s what’s new:

The side panel slide: The web version of Gmail has a slide panel slide for easy access to other apps in the Google suite like Keep, Calendar, Tasks etc. (no more pinned tabs for me!). When the side panel icon is clicked, the panel opens out to share the screen between your inbox and the preview of the selected app.

Google says the panel should work with 3rd party business apps as well.

On hover actions: Hovering on an email gives you action options such as Mark as Read, Delete and SNOOZE! The new Snooze feature allows you to set reminders about an email.

Along with this, rounded, clickable icons under the subject of the mailer allow accessibility to attachments. This makes the search for important files easy.

Nudge feature: The new Gmail design will have a text reminder to reply to emails which haven’t been responded to. Google says this is an AI-powered feature so it could be that Gmail assesses if the email/sender is important or the timeliness of the message for the alert. 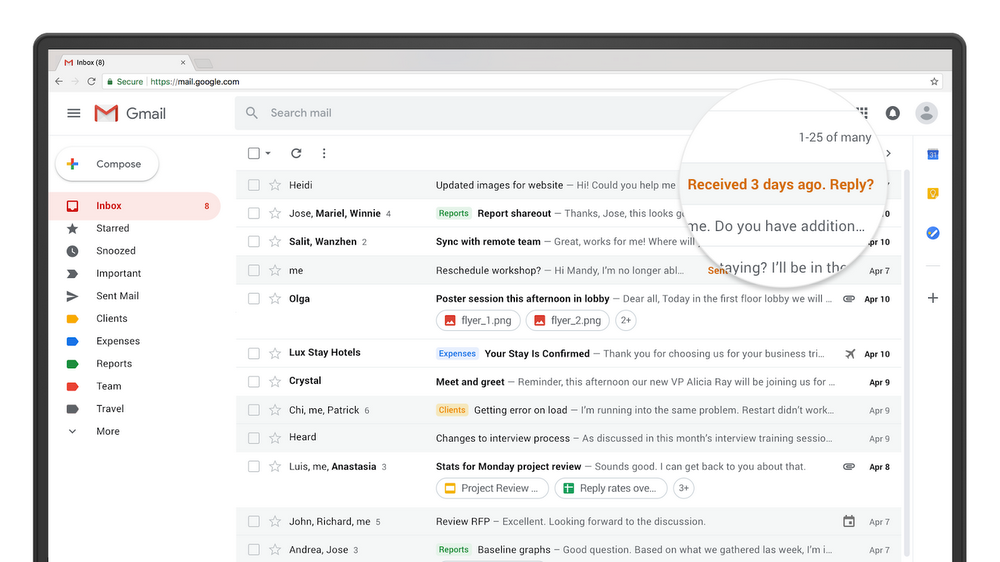 Smart replies:  Gmail’s one tap responses feature makes replying easy. Text templates like “Thank you”, “Approved” etc. at the bottom enables fast responses. While smart replies was available on Gmail mobile apps previously , it will now be available on the Gmail web version too.

Gmail Confidential mode: Once this feature is rolled out for the general public, you will be able to set expiry dates and revoke previously sent emails through Gmail’s Confidential Mode. This enables you to protect sensitive content. Once the date is passed, actions such as forwarding, downloading, etc. cannot be done. The recipient is notified of expiration date in the email itself. 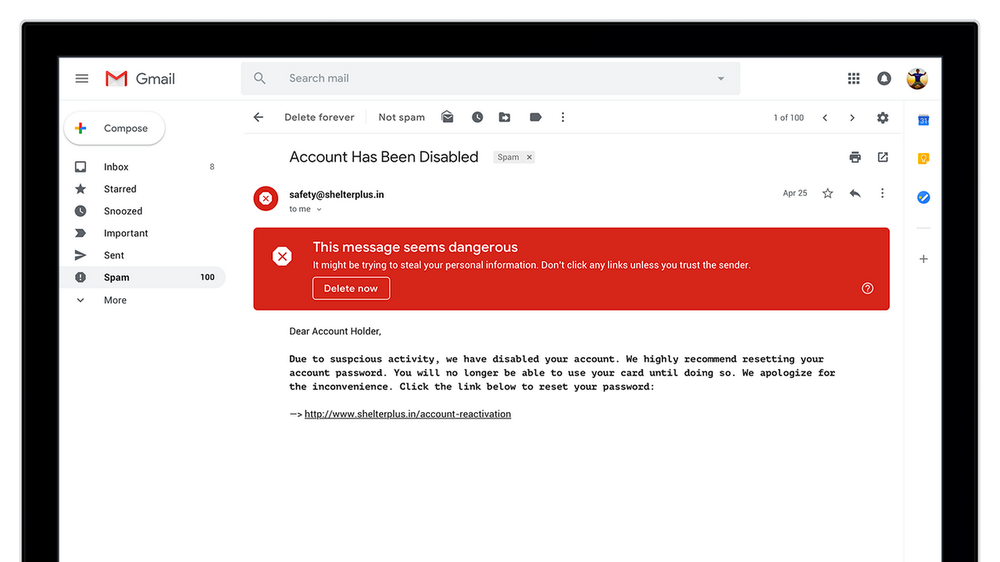 Important Notifications only: Gmail on mobile has a new feature where push alerts only from important messages are displayed. This helps minimize interruptions and clutter on the notifications tab. 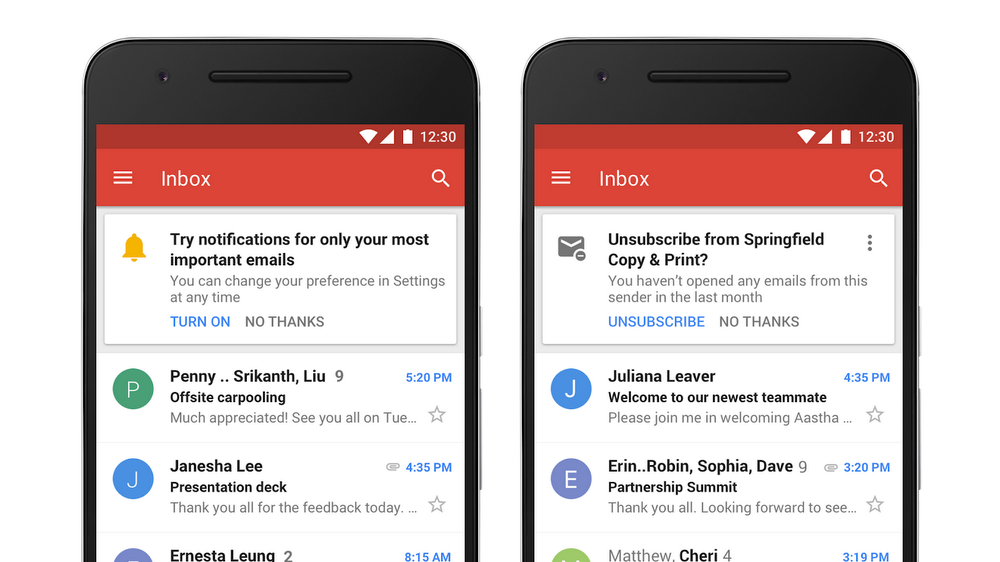 Google Task – I love this one! This feature allows you to simply drag emails to the Tasks side panel to add a new ‘To Do’ item. Great for when you’re pressed for time but also don’t want to miss out on a task. 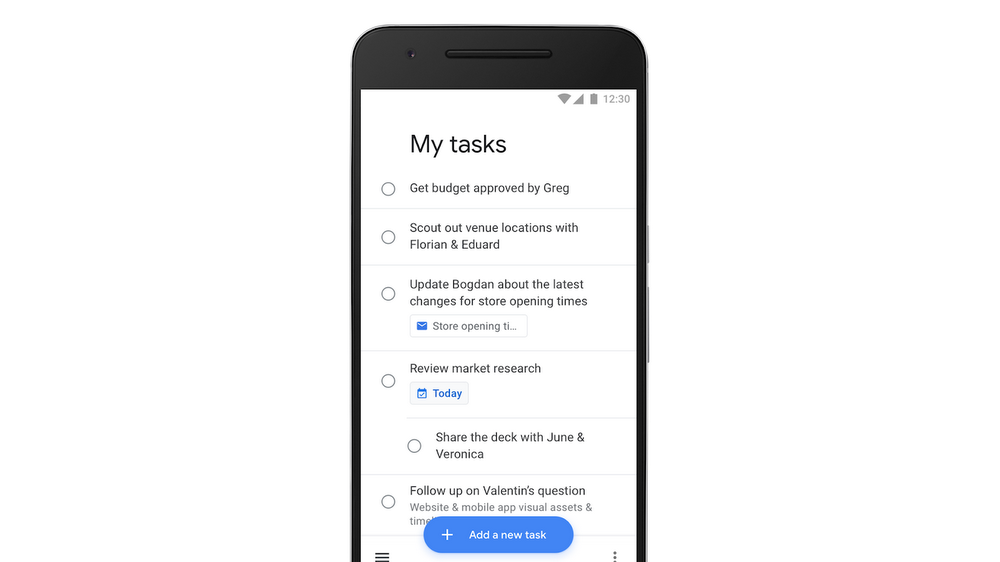 Smart Compose: The latest feature to be announced by Google is ‘Smart Compose’ which predicts what you will type next. The suggested text appears in the background in a light coloured font. You can press the tab key to accept a prediction.

While Google added some swanky new features to Gmail, the email service also got a facelift. The visual presentation was tweaked to be in line with Google’s Material Design Philosophy. Some other changes included font changes from Arial to Product Sans for interface elements and Roboto for email & messages – to make text reading easier on mobile devices.

Great, right? Well, if you’re not ready for change, Google as always respects that and you can revert to the old version with a single click.
If you haven’t yet started using Gmail and these features excite you then head over to ResellerClub and you can get Gsuite for your business. A huge advantage with G Suite for businesses is that you can have branded email addresses for those in your organization.  Which means, you can have a sales@yourcompany.com or a finance@yourcompany.com all on the same Gmail platform. Here’s more information if you’re interested. I enabled the New Gmail for my inbox a few days ago and I love it! I love how easy it is to mark mails as ‘Unread’, to drop emails in the To-Do & have my calendar on the same window tab. It’s user friendly and efficient. Try and let me know your thoughts in the comments below. 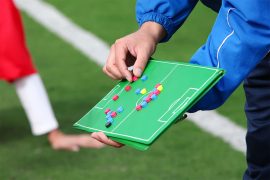 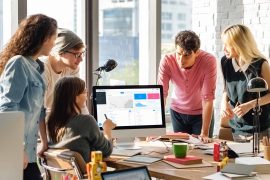